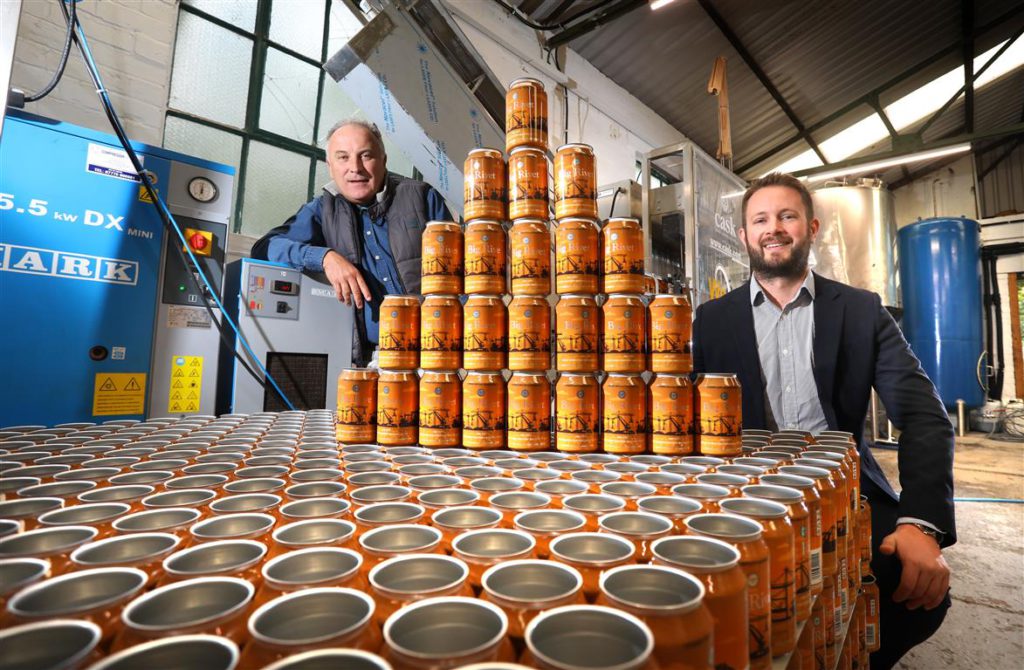 The growth plans of an ambitious North East craft brewery based in a famous location are coming to a head thanks to a five-figure investment from the North East Small Loan Fund Supported By The European Regional Development Fund.

The Great North Eastern Brewing Company produces a growing range of hand-crafted cask, keg and bottled beers at its premises in Dunston, which are set between the banks of the Tyne and the site of the old Federation Brewery.

As part of its continuing expansion, the Brewery management team has worked with regional fund management firm NEL Fund Managers to secure a £50,000 investment, which has been used to install a brand new canning line alongside its existing bottling line.

As well as being used for its own products, the Brewery is making the new line available to other North East micro-breweries, meaning that they will no longer have to send their products away from the region to be canned.

And it has now launched a crowdfunding campaign to support the next stage of its development, which will provide supporters with the chance to be the first to get to try its new Big Rivet beer.

Founded five years ago by managing director Paul Minnikin, the Great North Eastern Brewing Company currently produces about 10,000 pints every week, and is aiming to double that number in the coming months, with up to six new jobs expected to follow as operations expand.

Its award-winning products are widely available in pubs, restaurants, hotels and off-licenses right across the North East, and can also be found as far afield as Edinburgh, Morecambe and York.

Managing director Paul Minnikin, who left a career in financial services to set up the business, says: “We’ve been growing steadily over the last few years, but we’re really starting to fly now and the new canning line is the crucial next stage of our development.

“Having the new canning line alongside our existing bottling line really opens up a range of new possibilities for the business, both in terms of our own products and in helping other North East brewers reduce their costs by packaging their beers within the region rather than elsewhere.

“We currently have around 20 different products which are widely available right around the North East and our eventual aim is to become a nationwide retailer.

“Dunston has been the source of many iconic North East beers in the past, and through our new crowdfunding campaign, we’re looking to develop Big Rivet into the next one, as well as to keep the overall business moving forward.

“The NEL team was easy to deal with, quickly developed a detailed appreciation of the business and really understood what we’re looking to do in the future.”

Part of the £120m North East Fund and aimed predominantly at smaller SMEs, the £9m North East Small Loan Fund typically offers loans of between £10,000 and £100,000 to businesses in Tyne & Wear, Durham and Northumberland.

Mike Guellard, investment executive at NEL Fund Managers, adds: “The Great North Eastern Brewing Company is a highly impressive operation that delivers quality products to a growing range of customers and has a clear, robust plan for the next stages of its development.”

The overarching £120m North East Fund will provide financial support for more than 600 businesses, creating around 3,500 jobs and delivering a legacy of up to £80m for further investment into the region.

For more information on NEL’s investment criteria, visit www.nel.co.uk or contact the investment team on 0345 369 7007.