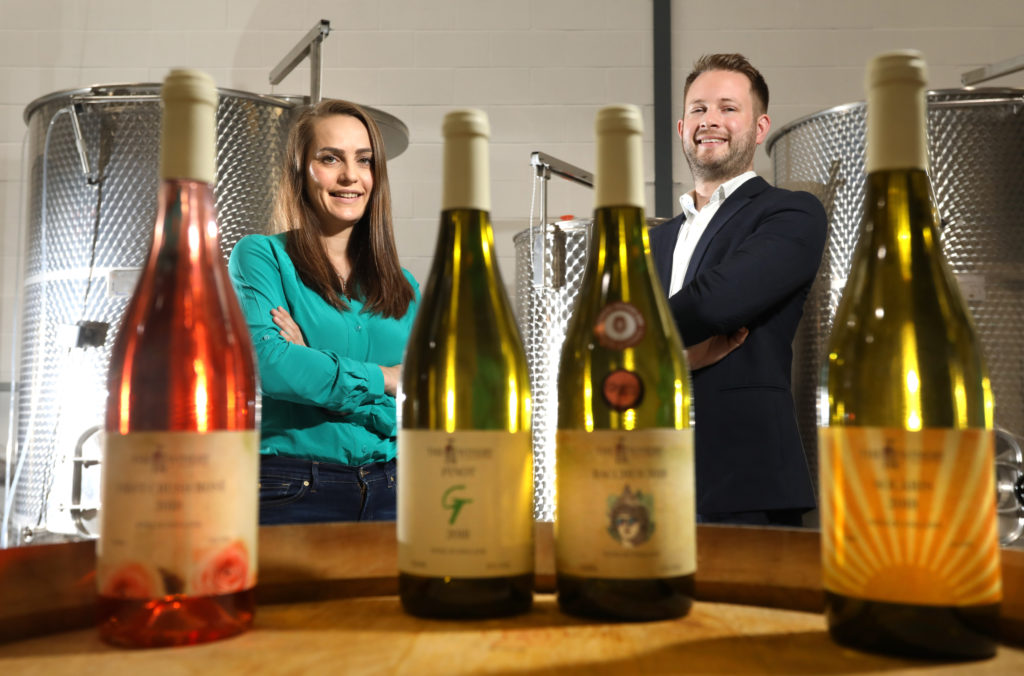 The North East’s first urban winery is aiming to change people’s perceptions of English wines with the help of a five-figure investment from the North East Small Loan Fund Supported By The European Regional Development Fund.

Based in Team Valley, Laneberg Wine is the most northerly winery in the UK and released its first vintage of white and rosé wines this year, using grapes grown at a vineyard in Leicestershire.

Its Bacchus 2018 white wine won medals at both the Wine GB Awards and the International Wine And Spirits Competition – and work is now set to begin on producing its next vintage, which will once again only be made from English grapes.

Laneberg Wines has worked with regional fund management firm NEL Fund Managers to bring in a £35,000 investment which, as well as supporting the production of a wider range on wines for 2020, will also enable it to recruit and train a wine-making apprentice.

Its wines are now stocked in a growing range of high-end North East retailers, including Fenwick, Richard Granger in Jesmond and The Corbridge Larder, while they are also on the wine lists of restaurants including The French Quarter in Newcastle, Bistro 46 in Jesmond and Sorella Sorella in Gateshead.

Laneberg Wines was set up by Elise Lane, who grew up in Newcastle before moving away 20 years ago to take a degree in chemistry at Oxford University, and who had developed an interest in and knowledge of wine-making in parallel to her successful corporate finance career.

She gained a post-graduate diploma qualification from Plumpton College, the UK’s acknowledged wine-making centre for excellence, and acted as assistant winemaker at the College’s own winery, as well as teaching some of its students.

Elise and her family returned to the North East two years ago, and she decided to put her knowledge to commercial use while also bringing up her two children.

Plans are now in place to expand Laneberg’s range of wines, including producing its first red and sparkling wines, while holding public events and tastings at the winery also form part of the business’s longer-term aims.

Elise Lane says: “The quality of English wine has never been better, and that is reflected in the terrific response that we’ve had to our first products from both stockists and consumers.

“We had a fantastic crop of grapes to work with in 2018 which enabled us to produce some stand-out wines, and we’re extremely proud to have won both national and international recognition for our very first vintage.

“We want Laneberg Wines to become a staple part of North East wine drinkers’ list of favourites, and we’re working towards widening the range that we produce to ensure we’re appealing to lots of different types of customers.

“We’ve learned a great deal over the last couple of years, both about the wines we’re making and the ways in which we can bring them to market, and the prospects for this year’s vintage look extremely strong on both fronts.

“Accessing investment from a fund that is solely focused on our region was very appealing to us, and the NEL team helped make the application process smooth and straightforward.”

Part of the £120m North East Fund and aimed predominantly at smaller SMEs, the £9m North East Small Loan Fund typically offers loans of between £10,000 and £50,000 to businesses in Tyne & Wear, Durham and Northumberland.

Mike Guellard, investment executive at NEL Fund Managers, adds: “The North East might not seem like the obvious place for this sort of business, but Laneberg has already demonstrated the quality of its wines and has robust plans in place for scaling-up production in the future.”

The overarching North East Fund will provide financial support for more than 600 businesses, creating around 3,500 jobs and delivering a legacy of up to £80m for further investment into the region.

NEL is also responsible for investing the £18m North East Growth Capital Fund, which offers unsecured investments of up to £500,000 to established businesses looking to realise their growth potential.