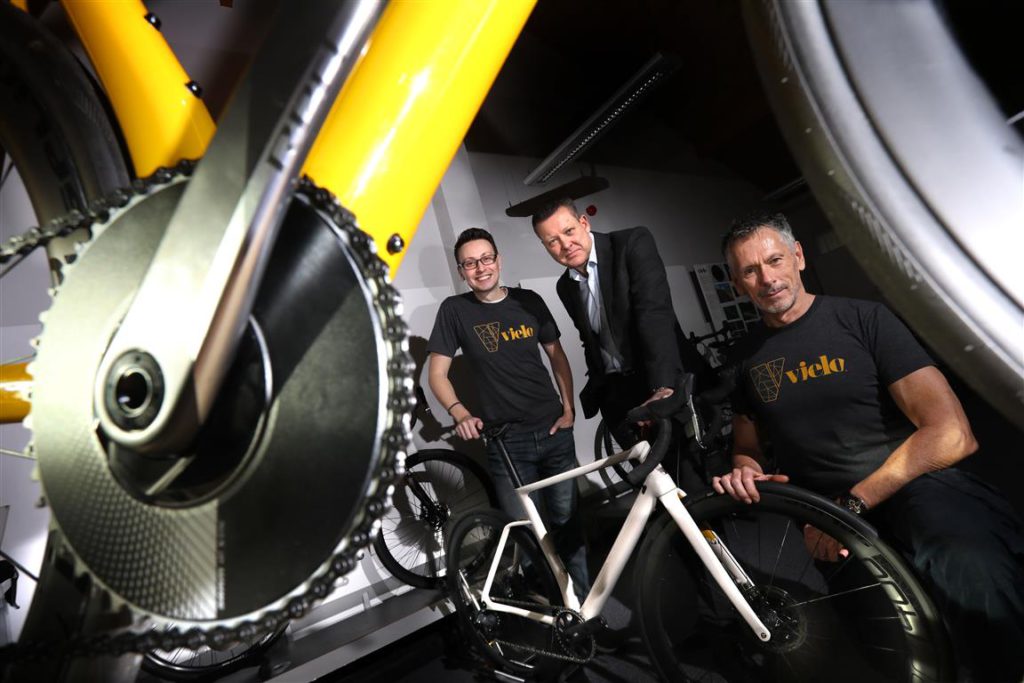 And having enjoyed significant success with the Vielo V+1 carbon-framed off-road gravel bike, the Gateshead-based firm is using a £50,000 investment from the North East Small Loan Fund (supported by the European Regional Development Fund) that NEL now manages to support the launch of its new R+1 road bike.

Two new North East jobs are being created through the launch of the carbon-framed R+1, which optimises the frame design around a unique 1x gearing system to provide significantly improved performance for the serious leisure rider.

The R+1 prototype frame received rave reviews when it was unveiled at the Sea Otter Classic bike show in California last year, and it is due to go on sale via the Vielo website and through a network of independent bike shops in the UK, Europe and the US in the summer.

The investment will also enable Vielo to increase its stock of V+1 bikes, which will help meet continuing customer demand.

Ian and Trevor Hughes have more than two decades’ experience of working with leading British and European cycling brands, including bringing the Swiss-based Scott brand to the UK and acting as UK distributor for German road brand Lightweight Wheels.

After being approached in 2016 by a number of bike manufacturers about acting as their UK distributor, they decided the time was instead right to launch their own range of highly detailed, technology-led bikes.

Trevor Hughes says: “Vielos are aimed at third or fourth-time buyers who know what they want out of a bike, and who value the type of high-end design, materials and detailing that goes into our products.

“The response to the V+1 has been extremely positive, with strong sales across the UK and Europe, and a growing market in the US, and we’re very confident that the R+1 is going to appeal to our target audience just as much.

“The R+1 has been specifically designed to turn heads among serious leisure cyclists, a community which is notoriously tough to impress, and the fantastic feedback we’ve had on it so far suggests we’ve done what we set out to do.

“We’ve had pre-orders coming in months in advance of our launch date and are excited to be getting it out on the road in just a few months’ time.

“We’ve had a really good relationship with the NEL team over the last few years, with the mentoring we’ve had around different parts of our commercial operations being especially valuable, and they were our first choice when it came to looking for an investor in our latest plans.”

Part of the £120m North East Fund and aimed predominantly at smaller SMEs, the £9m North East Small Loan Fund typically offers loans of between £10,000 and £50,000 to businesses in Tyne & Wear, Durham and Northumberland.

Mark Wharton, portfolio executive at NEL Fund Managers, adds: “Trevor and Ian have married a passion for cycling with serious design expertise and are creating amazing bikes which really stand out from the crowd.

“Ensuring growing North East businesses have access to investment capital at different stages of their development is crucial in ensuring they have the best possible chance of realising their potential.”

The overarching £120m North East Fund, which is supported by the European Regional Development Fund and the European Investment Bank, will provide financial support for more than 600 businesses, creating around 3,500 jobs and delivering a legacy of up to £80m for further investment into the region.